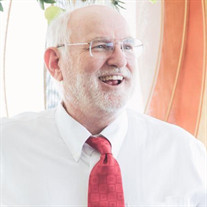 On July 28th, 2021, Roger Payton Shipp, father, brother, husband, and PopPop passed away at the age of 68. Roger was born on January 31, 1953 in Santa Cruz, California to Isabella “Neona” Shipp (Beans) and Robert Shipp. Before retiring in 2016, he spent a year in Australia as a high school exchange student, served four years in the Air Force as a weather technician, an instructor for the College of Saint Mary’s in Omaha, Nebraska, a brief time with Profitstar, and ended his career after 20 years as a Computer Specialist for the county of San Luis Obispo, California. Afterward, he enjoyed volunteering at the Piedras Blancas lighthouse guiding tours. He received two Bachelor's Degrees, one in Geography and the other in Computer Science. Roger was preceded in death by his mother Neona, father Robert, and brother Hank. He is survived by his wife Catherine, daughters Chelsea and Deidre Pedersen with her husband Greg, son Aaron and his wife Katie, granddaughters Mabel, Ruby, and Memphis, grandson Crosby, sister Edith Rivett, brothers George with wife Cyndee, Bill and wife Cherry, and Daniel with his wife Debbie. Roger was loved by many cousins, nieces, nephews, and was known to his grandchildren as “PopPop”, whose love for them was immeasurable. An avid fan of any and all games, Roger died with an undefeated record, having never lost to any of those listed above. This impressive record, always brought under scrutiny, reached a fever pitch in 2001 when Roger was accused of doping during a game of Monopoly. The following test results, however, only produced heightened levels of the 23 ingredients found in Dr. Pepper and the charges were summarily dropped by his son. Over the course of his life, Roger was known as a warm, charismatic man who was easy to befriend. He is remembered fondly by the many friends he made in California. His close friends Marsha and Larry Cusic, Steve and Debbie Nugen, and Bob and Shirlee Tourek were constant confidants and respites. All of them shared a passion for spirited debate, thoughtful conversation, and a freshly opened deck of playing cards. With his wife, he traveled often to see their friends and grandchildren, though he and Catherine had wished for many more road trips to places often discussed but not yet experienced. As a father, Roger’s children knew him as a man of great ethics, loyalty, and generosity. His sternness was complemented by a laissez-fairness toward that which simply could not be changed. He had an especially close relationship with daughter Chelsea, who was along for many of his and Catherine’s adventures once residing in California. The trio returned to Omaha in 2020, reuniting parents and all three children far too shortly before Roger fell ill. In accordance with Roger’s wishes, a celebration of his life will be announced in the coming months when the weather is nicer and a suitable location can be decided. Roger would have loved this location to be New Zealand..but he also played Powerball regularly in hopes of being rich and winning would’ve definitely helped that materialize.

The family of Roger P. Shipp created this Life Tributes page to make it easy to share your memories.

Send flowers to the Shipp family.