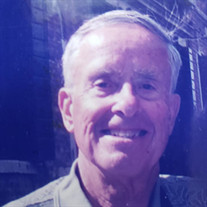 Robert E Holmberg Dec. 19, 1932-Nov. 30, 2021 Robert “Bob” Holmberg was born on December 19, 1932 on the family farm near Wausa, Nebraska, as the youngest of four children to Clarence and Edith Holmberg. In his childhood, he loved basketball and reading. He spent much of the cold, hard winters with his Swedish aunt, Dagmar, who lived close to the school in town. After graduating from Wausa High School, he went to work for a defense contractor in Hastings and later enlisted in the United States Navy. While serving in the Navy, he was stationed in California and Honolulu, Hawaii, during the Korean War. Upon being honorably discharged, he returned home to Wausa where he met his future wife, Mary Anne (Marvin). Mary Anne spotted Bob in a restaurant in town and remarked to a friend about the handsome man sitting at the restaurant having coffee. A man behind her stood up and said, “that’s my son.” They were introduced a week later at Palace of the Swedes before Bob asked Mary Anne if she would like to go for a drive. That began a lifelong relationship and 63-year marriage. Bob and Mary Anne married at St. Mark’s Lutheran Church in Bloomfield, Nebraska, in 1958. They then moved to Omaha and settled in their first home on N. 39th St. before welcoming their daughter, Jeanne Dione. Four years later, they welcomed Todd Robert, and moved to their home on S. 126th St. Bob worked at Merchants Biscuit Company as a clerk before joining Union Pacific Railroad in the early 1960s. He was also active in the Omaha Jaycees during that time. In the 1970s, while working full time for UP, he proudly returned to school and earned an associate’s degree from the University of Nebraska at Omaha. In 1978, at the age of 46, he picked up running and became active in the Omaha Running Club. He quickly made a name for himself. An article in the Plains Track Club newsletter referred to him as “one of the more persistent and consistent runners in the Midwest.” In fact, he ran the coveted Boston, Chicago and New York Marathons, in addition to smaller races in Omaha, Sioux Falls and Dallas. One of his best marathon finishes was a 2:56 finish at Grandma’s Marathon in Duluth, Minnesota. Bob continued to make health and fitness a priority in his life well into his late 80s, with daily trips to the gym up until the pandemic hit in 2020. Bob’s work at UP helped the family move to their long-time home on Montclair Drive in 1972, where he and Mary Anne lived until 2015. He retired from UP in 1988 as a financial analyst in the president’s office after a 30-year career. During his retirement, Bob and Mary Anne spent much of their time with their grandchildren, Stephanie and Sarah (Sadie) and traveling to see Todd and his wife, Teri. They were thrilled to welcome a third grandchild, Hayden, in 2003, and enjoyed many extended visits with him in Michigan, Texas and Manhattan, Kansas. Stephanie and Sarah will fondly remember many nights spent playing Dominoes, Scrabble and other games, on camping trips, as well as trips downtown for concerts and summer events. Hayden will always remember playing with their many beloved Schnauzers on their visits over the years. Bob and Mary Anne’s travels brought them on many cross-country trips in their motorhome. They wintered several years in southern Texas and were active members of the Good Sam Camping Club. They spent their 50th wedding anniversary in Hawaii and traveled to Alaska and Europe. Bob also stayed active with the Montclair Citizen’s Patrol and with the chorus at Rejoice Lutheran Church. He is survived by his wife, Mary Anne; daughter, Jeanne (Mike) Fielder; son, Todd (Teri) Holmberg; grandchildren: Stephanie (Michael) Gaughen, Sarah (Mads) Anderson, Hayden Holmberg; great-grandchildren: Benjamin, Victoria, Keegan, Renny and Charlotte; sister, Mary Keifer; many other relatives and friends. Bob was preceded in death by his brothers, Richard and Carlton (Cottie). A private service will be held at the Omaha National Cemetery Braman Mortuary (Southwest Chapel) 6505 S. 144 St. Omaha, NE 68137 402-895-3400

The family of Robert E. Holmberg created this Life Tributes page to make it easy to share your memories.