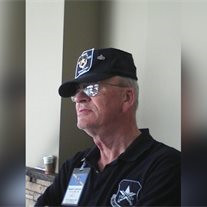 Nugent Dale Jackson passed away on March 22, 2021 at his home in Omaha after a long battle with cancer. Nugent was a proud United States Air Force veteran who served 20 years (1959-1979) as a Security Forces Staff Sergeant. He served in Vietnam from 1970-1971 at Tan Son Hnut Air Force Base and was a long time member of the VSPA (Vietnam Security Police Association), VFW, The Moose Lodge of Iowa City, and the American Legion. Nugent was born June 27, 1940 to Nugent John and Erma Jean Jackson in Higginsville, Missouri. He married his first wife Shirley (nee Finley) in 1957. They had four children together, Nugent Dale Jr., Sheryl, Lisa, and John. Nugent and Shirley were married for forty-two years before her death in 2001. Family was always Nugent’s joy. In addition to his children and stepchildren, he also enjoyed spending time with his nine grandchildren and seven great grandchildren. During his time in the military, Nugent was stationed all over the US as well as Greenland, Korea, and Vietnam. Retiring from service, he began his love of travel. During his retirement, Nugent and Lora visited Hawaii, Alaska, Australia, New Zealand, Europe, and took cruises to the Caribbean and Panama Canal. Nugent loved riding motorcycles. After his retirement from the Air Force, he took many cross country trips on his Goldwing and rode with the Iowa City Iron Pegasus Motorcycle Club. Dancing was also a lifetime passion. Nugent and his sister Dona were once Iowa state swing champions and he dominated the dance floor well into his 70s. Nugent loved playing cards of all kinds. He could be found on many evenings with his favorite rum and coke in his hand playing poker with his friends and family. He is survived by his wife Lora Irlbeck Jackson, his sister Dona Ybarra, his brother John Dennis Jackson (Nancy), his children Nugent Dale Jackson Jr. (Amy), Sheryl Bergen-Jackson (Kim), Lisa D. Aldeman, John L. Jackson, his step children Jeffrey Irlbeck (Emily), Michael Dermody, (Bridget), nine grandchildren, and seven great-grandchildren. Nugent was preceded in death by his first wife of forty two years, Shirley Jackson (Finley) and his parents. A Celebration of Nugent’s Life will be held on Friday, March 26, 2021 at 1pm at the Benson VFW (Veterans of Foreign Wars) Lodge #2503 on 8904 Military Road, Omaha, NE. A private inurnment will take place at the Omaha National Cemetery.

Nugent Dale Jackson passed away on March 22, 2021 at his home in Omaha after a long battle with cancer. Nugent was a proud United States Air Force veteran who served 20 years (1959-1979) as a Security Forces Staff Sergeant. He served in Vietnam... View Obituary & Service Information

The family of Nugent Dale Jackson created this Life Tributes page to make it easy to share your memories.

Send flowers to the Jackson family.