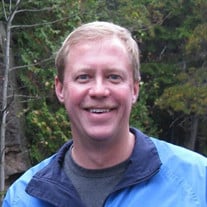 Gary John Peterson, of Omaha, NE died on September 24, 2021. Gary was born June 30th, 1959, in Huron, South Dakota, son of Lowell G. Peterson and Eileen L. (Wideriksen)(Hershman) Peterson. Gary grew up in Mitchell, SD and graduated from Mitchell High School in 1977. He went on to college at the University of South Dakota, Vermillion, where he graduated with a Bachelor of Science degree in Business Management and Administration. Gary worked for Shopko stores in Management in Mitchell, SD, Spencer, IA and Omaha and Bellevue, NE. He then worked at Barnes and Noble stores as Store Manager in Omaha and Roseville, MN. Gary met Elisabeth “Lis” Bruce in Omaha and they got married in 1995. Instead of having children, they had dogs – Boston Terriers and Springer Spaniels. Gary loved his dogs and was more their playmate than “dog dad”. Gary was known for his sense of humor and quick wit. He liked to pull pranks on co-workers, family, and friends, from popping balloons to scare his co-workers, to lighting off fireworks at random times of the year, to texting his electrician nephew that he was going to use 240-volt power on a project (when he should have been using 120-volt), causing an immediate phone call. If you knew Gary, you know of his pranks. Gary liked to sing the beginning of an old advertising jingle and then stop to see if family/friends would complete it, and they always did. He and his mother-in-law, Carole, always tried to surpass each other with puns. He was a gatherer of information and simply used it down the road for humor value. Gary was often the life of the party and loved to visit (“let’s just sit down and visit”), which he considered a family gift. He liked to go to the grocery store and since he was very frugal, the goal was to see how much money he could save. He would wave the receipt in the air and announce the total savings upon his return. Gary was very neat, organized and somewhat of a perfectionist. During his lifetime he enjoyed golfing, reading, watching scary movies, manicuring his yard (goal was to be best in neighborhood), cooking, taking on home and building projects, listening to music, going to concerts and collecting beer signs. Gary was a Green Bay Packer fan, a Wisconsin Badger and Nebraska Husker fan, and a Minnesota Twins fan. During his lifetime Gary enjoyed being at Masters Practice Rounds, PGA tournaments, the Packer/Denver Super Bowl, and seasons of Minnesota Twins baseball. He attended Berkshire Hathaway meetings in Omaha, went deep sea fishing in Florida and took a glider flight by Faribault, MN. Gary had a fascination with 9/11 (first visit to New York City was at 12 years old) and hoped to go to New York again to see the completed memorials. He was a sensitive and caring person, adored and well-liked by those who knew him. He was greatly loved and will be greatly missed by all. Gary is survived by his former wife, Elisabeth (Lis) Peterson of Omaha, NE, his aunts Gloria Brockman (Robert) of Wessington Springs, SD, Joy Baker (Wallace) of Miller, SD, and Helen J. (Wideriksen) Wagner, of Wichita, KS, step-nephew, Brad Hershman (Brenda) of Sioux Falls, SD, step-niece, Lisa Peterson (Doug) of Tea, SD, mother-in-law, Carole Bruce, sister-in-law, Anne Bruce (Pam) of Salem, SC, brother-in-law, Tom Bruce (Peggy) of West Bend, WI and many loving nephews and nieces, cousins, and other loving relatives and friends. Gary is preceded in death by his parents, Lowell G. Peterson, and Eileen L. (Wideriksen)(Hershman) Peterson, stepbrother, Roger Hershman, stepsister, Lynda (Hershman) Brookings, grandparents, Hugo and Clara Peterson, and Hans and Bertha Wideriksen, step-grandfather, Duane Wolcott, uncles, Larry Prangley, Donald Peterson (Darlene), Richard (Dick) Wideriksen, and Chuck Wagner, aunt, Darlene Wilson (William), father-in-law, Charles Bruce, and cousins Kevin Wilson, Teri Burgess and Lori Brockman. Gary’s connection to his church, his acceptance of Jesus as his Savior, and the hope we have in Christ assures us we will be together again with those we love in eternity. A memorial service will be held on Saturday, October 16th at 11:00am, with family receiving friends one hour prior to the service, all at FaithWestwood United Methodist Church, 4814 Oaks Lane, Omaha, NE. There will be a luncheon immediately following the service at FaithWestwood. A service and committal will be in Mitchell, SD at the Graceland Cemetery at a later date. Memorials may be directed to: FaithWestwood United Methodist Church, 4814 Oaks Lane, Omaha, NE 68137. (402) 895-3394; www.faithwestwood.com. Braman Mortuary – Southwest Chapel 6505 S. 144 St. Omaha, NE 68114 402-895-3400

The family of Gary John Peterson created this Life Tributes page to make it easy to share your memories.

Send flowers to the Peterson family.