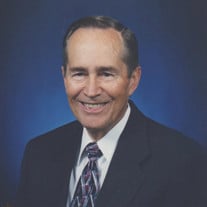 Larson, Dale L. September 12, 1927 ~ December 29, 2021 Dale Lynn Larson passed away December 29 at the age of 94. He was born September 12, 1927 in York NE, the third of four children born to Charles V. Larson and Hattie H. Lind. His early years were spent on the family farm outside of Stromsburg – an area where many of the Larson and Lind relatives lived. The family moved to Fremont where Dale attended high school while working at a movie theater, bowling alley, and at the munitions plant in Meade to support the war effort. Dale enlisted for WWII service as soon as he was of age. After boot camp in Brooklyn, NY and LORAN training in CT, he served in the U.S. Coast Guard in South Carolina until the conclusion of the war. He returned to Fremont and obtained a degree from Midland University thanks to the GI bill. He considered re-enlisting for flight school, but decided instead to seek employment in Omaha where his brother Ray was working for OPPD. There he found a near life-long career with Travelers Insurance, mainly working as a field auditor, and met and married Jean Cowden on July 22, 1957. They raised two sons, Doug and Rod. He is survived by his wife of 64 years, sons, daughter-in-law Mary, grandsons Ethan and Isaac, and grand daughter-in-law Kelly. Dale was a good, dependable friend, father and husband. He loved sports as a participant and a spectator, bowling as a young adult and taking up golf later until it became too difficult (and he outlived all of his great golf buddies). Many a high school referee in the Omaha area has heard Dale’s voice yelling ‘constructive criticisms’. He indulged most of his son’s sports interests – including dirt biking in the backyard and taking them on cherished trips to the Fremont Lakes. He enjoyed playing cards and reading thick novels. He stayed close to his sons, grandchildren, siblings, and cousins and enjoyed many family reunions. He and Jean were long time members of the Covenant Church. Dale always showed a commitment to his health, quitting smoking, taking up regular exercise, jogging before it became popular, and trying to follow health food fads. He overcame several health issues like heart disease (including a failed bypass) and a Parkinson’s diagnosis over a decade ago. He inspired many others living with that condition. For the last many years of his life, he regularly drove to and exercised at the local health club, enjoyed a meal or two out, routinely read several newspapers, and remained impressively fit and mentally sharp. Dale will be greatly missed by his family and friends, but he lived a long fulfilling life and was ready for this spiritual transition. Private family memorial Service will be held. In lieu of flowers please leave condolences and share thoughts on Dale's tribute page. https://www.bramanmortuary.com/obituaries/Dale-Larson-9/#shareMemoryForm Memorials or to make a contribution in Dale's name can be directed to the Special Olympics organization. https://support.specialolympics.org/a/give-in-your-state?state=ne&sourceid=1041173&ms=google-nebraska&gclid=CjwKCAiAzrWOBhBjEiwAq85QZ5PdKsbbBkycNR89Y5gM4DFfj1piFZnqQc1sTauD7fAGTyKgedmw4BoC_qsQAvD_BwE

The family of Dale L. Larson created this Life Tributes page to make it easy to share your memories.