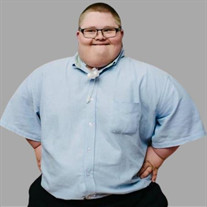 Sean Henderson, age 26, passed away, surrounded by family, on December 13, 2021. Sean was born on December 24, 1994, in Omaha, Nebraska to Steve and Cindy Henderson. Sean was the second of four children. He was a loving brother to his siblings, Matt, Lizzy, and Megan. Sean spent his early years playing summer baseball, playing outside with neighbors, and loving his time with his friends and teachers at school. Sean attended Disney Elementary, Millard North Middle School, Millard South High School, and the Young Adult Program in Millard, graduating in 2016. He spent his afternoons at Children’s Respite Care Center playing games with friends and helping his teachers with the other kids in his class. After graduation, Sean attended a day program at Region V in Gretna where he and his “crew” went out into the community and on many adventures. Sean was one of a kind. He had an ability to brighten everyone’s day. Family and friends will always remember his contagious smile, goofy personality, and wild dance moves. He loved performing at-home concerts, playing Wii sports, rewatching his favorite shows over and over again, cheering on his favorite sports teams, and most of all, all things WWE. Sean is survived by his parents Steve and Cindy, brother Matt, sisters Lizzy and Megan, Grandparents Barb and Phil Hough, Grandpa Jerry Stodola, and numerous aunts, uncles, and cousins. Celebration of Sean’s Life: Thursday, December 30, 2021, from 4:00pm-8:00pm at St. Paul’s Lutheran Church (13271 Millard Ave, Omaha, NE 68137). Help remember Sean by wearing your favorite WWE or sports team gear. His favorite wrestler was John Cena, and his favorite teams were the Red Sox, Steelers, and Huskers. (Please dress comfortably. The family asks that ties not be worn, unless over a t-shirt, in true Sean fashion.) In lieu of flowers, the family asks that all memorials be directed to CRCC Omaha or the Region V Foundation. https://crccomaha.org/get-involved/donate-form.html https://www.regionvservices.com/foundation/ Braman Mortuary – Southwest Chapel 6505 S. 144 St. Omaha, NE 68114 402-895-3400

Sean Henderson, age 26, passed away, surrounded by family, on December 13, 2021. Sean was born on December 24, 1994, in Omaha, Nebraska to Steve and Cindy Henderson. Sean was the second of four children. He was a loving brother to his siblings,... View Obituary & Service Information

The family of Sean M Henderson created this Life Tributes page to make it easy to share your memories.

Sean Henderson, age 26, passed away, surrounded by family, on...

Send flowers to the Henderson family.