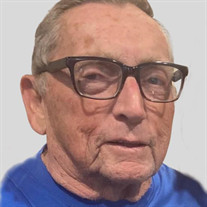 Peterson, Richard “Pete” 09/16/1934 – 11/17/2021 Over the years Richard has worn many hats and been known to many people by different names. Some of you know him by Richard, some by Dick, and many know him as Pete. One thing never changed, he was always hardworking, dedicated, and could tell a joke that would make you laugh for hours. Richard Albert Peterson, the son of James Albert Peterson, and Beatrice Mae (Dalton) Peterson, was born September 16, 1934. He was the 5th of six children; Ruth, Louis, Betty, Bob, and Paul. Richard went to school up until the 8th grade when he started working alongside his dad delivering milk for his father’s business. He would pick-up milk from local farmers in Logan, Woodbine, and Missouri Valley, IA and deliver it to dairies in Council Bluffs and Omaha. Then on September 21, 1952 Richard married the love of his life Eleanor Marie (Purcell) Peterson of Missouri Valley, IA. As of September 21, 2021 they have been to together 69 years. On February 1, 1957 Richard proudly entered the ARMY USAR ARTILLERLY, and Honorably Discharged on January 1, 1959. From 1959 to 1969 worked as a machine operator for Western Electric and at night worked his business mowing lawns for Peterson’s Lawn Service. In 1961 Richard became a father to Debra (Debbie) Ann Peterson, and then again in 1964 to Linda Ann (Peterson) Rohmiller. In September 1968 Pete became the Owner and Operator of Pete’s DX on the corner of 132nd and Millard Ave. Throughout the years it has evolved into Auto-Repair, Towing, Service Center. Then in 1975 He even used one of the bays as a Bicycle repair shop during the gas shortages. Pete’s Service Center was well known for customer service and “Lightning-Fast Lube” oil-changes. they were known to knock out an oil change in 15 minutes. On Saturday’s it wasn’t uncommon for them to get 50 plus oil-changes done before noon. He became a grandfather to Kayla Marie Rohmiller in 1987 and Ryan Anthony Rohmiller in 1989. In September of 1998, after 30 years of hard work in business Pete and Eleanor retired. In 2014 he became a great grandfather to Ryker Evans Bird, and again to twins Easton Anthony Bird and Emersyn Rian Bird in 2015. To know him is to love him. There was never a person he met that he didn’t have a story to tell. He may not have had the education that most did, but he had the dedication and determination, and most importantly hard work. He was a great man that will be missed for his jokes, laugh, and integrity. We love you, and miss you more you will ever know. Preceded in death by daughter Debbie Peterson. Survived by wife of 69 years, Eleanor; daughter Linda (Ed) Rohmiller; Grandchildren Kayla (Chad Bird) and Ryan Rohmiller; Great-Grandchildren Ryker, Easton, and Emersyn. Gathering of Family and Friends: Wednesday, November 24, 2021 from 5-7:00PM at Braman Mortuary (Southwest Chapel). In lieu of flowers donations may be made to The Nebraska Humane Society. Braman Mortuary (Southwest Chapel) 6505 S. 144 St. Omaha, NE 68137 402-895-3400

The family of Richard Peterson created this Life Tributes page to make it easy to share your memories.

Send flowers to the Peterson family.