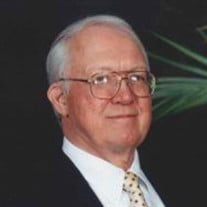 HAILE, James S. “Jim” 11/2/1933 – 5/1/2021 James S. Haile (Jim) was born November 2, 1933 in Grand Island, Nebraska to Ruby (Knod) and James C. Haile. He graduated form Grand Island Senior High School in 1952 and proudly served in the United States Navy from 1952 to 1956 aboard the USS Markab. During his service he was stationed in Rhode Island and met his beloved wife, Gail. They married in 1954 in Pawtucket, Rhode Island. They had one daughter, Cynthia. They moved to Grand Island in 1956 after the service and he worked for his father for a few years before starting his own welding business, Haile Steel and Supply in 1965. He was a member of several Masonic Lodges, the American Legion, the Blacksmith Association, and the American Welding society. He was very interested in politics and even ran for Grand Island City Council in 1964. Jim and Gail moved to Omaha in 1974 where he ran River City Machinery, his machinery supply business. He loved talking to people and was a great salesman. Jim and Gail were avid Nebraska football fans and held season tickets. They never missed a home game and even attended many away games to cheer on the Huskers. Go Big Red!! He loved animals and gave to many charities including the Nebraska Humane Society. He raised German shepherds in his younger years and our family was always surrounded by dogs and cats. He loved to garden and was very proud of his Canna Lily plants. He liked to golf, travel with Gail, and hang out with his cats at home. Jim is preceded in death by his parents, brother Jack, sister Joan, and granddaughter Megan. He is survived by his wife Gail (Robillard) of 66 years, sister Dorothy Enck, sister Joyce Peterson, daughter Cynthia, grandchildren Kimberly Jardine, and Alexander Leinweber, and great grandchildren Owen and Oliver Jardine Gathering of Family & Friends: Friday, June 11, 2021 from 11:00am – 1:00pm at Braman Mortuary (Southwest Chapel) Graveside Service: Friday, June 11, 2021 at 2:00pm at the Omaha National Cemetery. Braman Mortuary (Southwest Chapel) 6505 S. 144 St. Omaha, NE 68114 402-895-3400

The family of James S. "Jim" Haile created this Life Tributes page to make it easy to share your memories.

Send flowers to the Haile family.