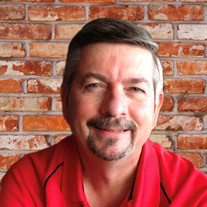 SMITH, David G. 8/16/1957 - 5/8/2021 David was born in New Castle, Indiana on August 16, 1957 to Calvin and Ruth Smith. He and his brother Stephen grew up in their father’s funeral home, where many memories were made. He graduated from New Castle Chrysler High School in 1975, he was best known for being the photographer of their school newspaper. Soon after, he joined the United States Air Force, where he started in the security police and advanced to Master Sergeant in the Office of Special Investigations (OSI). During his service he was stationed in Greenland, England, and various bases around the US. He graduated with a Bachelor’s degree in Criminal Justice and met his wife Beth while stationed at Offutt Airforce Base. They were married on September 17th, 1988. David was then stationed in Chicago, Illinois where they lived until his retirement. He retired in September of 1995 after serving 20 years. They moved back to Omaha, NE and in December of 1995 they welcomed their daughter, Erin. In 1997 he started working at Zurich Insurance as a Fraud Investigator, and continued until his death. He loved to spend time with his family and you would often find him taking pictures. He frequented National Parks and anywhere he could take pictures of wildlife, go camping, or fishing. He also enjoyed trying different bicycle trails wherever he traveled. Survived by his wife, Beth Smith; daughter, Erin Troidl (Chris); granddaughter, Gracie Troidl; brother, Stephen Smith (Cindy) Preceded in death by his parents, Calvin and Ruth (Schmidt) Smith Visitation: Thursday, May 13 from 5 pm - 7 pm at Braman Mortuary Southwest Chapel Funeral Service: Friday, May 14 at 11 am at St. Paul's Lutheran Church, 13271 Millard Ave, Omaha, NE To leave a condolence and for additional information visit: bramanmortuary.com

The family of David G. Smith created this Life Tributes page to make it easy to share your memories.

Send flowers to the Smith family.