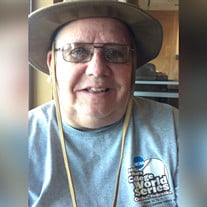 Terry Lynn Elwood of Omaha, NE (1953 - 2021) A Celebration of Life for Terry Elwood age 67 of Omaha will be held at 2 p.m. on Saturday, April 17th at the Plainview United Methodist Church in Plainview, NE. Visitation will be Thursday, April 15th at Braman Mortuary, Southwest Chapel, 6505 S. 144th Street, Omaha, NE from 6:00 - 8:00 pm. Inurnment will be at a later date. Terry passed away at his home in Omaha on April 9th, 2021 after a lengthy and courageous battle with Pulmonary Fiborsis. Terry Lynn Elwood was born July 4th, 1953 to Kenneth and Jean (Young) Elwood. He had two sisters, Sue and Nancy; and one brother, Daniel. He grew up on various farms around Plainview. He graduated from Plainview High School in 1971. He attended Universal Technical Institute in Omaha. He worked various jobs including Vulcraft, Glen Bonge Tiling Company, Great Dane Trailers, and retired from the Nebraska Department of Corrections after 22 years of service. He married Nikki Bonge at the Plainview Methodist Church on May 26, 1979. They lived in Lincoln, Norfolk, and Omaha. Two children where born from this union, Nathaniel and Natalie. He was a member of Living Faith United Methodist Church in Omaha, where he sang in the choir. Some of his favorite things to do included hunting, fishing, watching basketball and baseball and spending time with family and friends. He loved attending sporting events to listen to Nate play or march in the band and watching Natalie play basketball. Terry was preceded in death by his parents, his father-in-law Larry Bonge; sister-in-law Lola Elwood and brother-in-law Dennis Andersen. He is survived by his wife Nikki, children Natalie (Andrew) Spangler and Nathaniel. Grandson, Braxton Elwood. Brother Daniel (Marilyn) Elwood; Sisters Sue (Andy) Mann and Nancy Elwood. Mother-in-law, Darlene Bonge; Sister-in-law Lois (Dave) Hast; and Brother-in-law Dale (Wendy) Bonge; as well as many nieces, nephews and friends.

Terry Lynn Elwood of Omaha, NE (1953 - 2021) A Celebration of Life for Terry Elwood age 67 of Omaha will be held at 2 p.m. on Saturday, April 17th at the Plainview United Methodist Church in Plainview, NE. Visitation will be Thursday, April... View Obituary & Service Information

The family of Terry L. Elwood created this Life Tributes page to make it easy to share your memories.

Send flowers to the Elwood family.