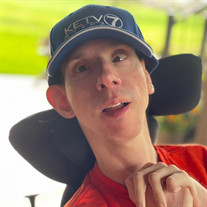 Matthew J. Thies July 15, 1976 - December 1,2021 Matt passed away peacefully at his home in Papillion, NE at the age of 45 on Wednesday, December 1, 2021. He leaves behind his wife, Cindy Carter; parents, Robert Thies and Diane Thies; sister Ali (Greg) Bruckner; aunts, Jackie Terry, Georgia Zastrow, Kim (Brian) Hogstad; uncles, Doug (Beth) Smith, Wayne Newman (Evelyn), Gerry Thies (Barb), and Don Thies (Peggy); nephews, Mitch (Abby), Dillon, Levi; many other relatives and friends. Matt also leaves behind Alan and Marilyn Palafox and their family who have been Matt’s second family. Matt was preceded in death by maternal grandparents, Bette and Kelly Smith; paternal grandparents, Pat and Mary Thies; uncles and aunts, Dick and Cammie Neumann, Lois and Marty Johnson, and Mike Thies; cousin, Kelli Zastrow. During the last few months of his life, Matt was able to reflect on a series of questions to create a memory journal. His greatest memories center on family, friends, music, and food. When asked what his greatest message to others would be, he responded, “my one thought would be to live, live for today because you never know when God will call you. So make your life good while you’re here, and go for your dreams because it might be hard now but you got to live like you can do anything you want to.” The way Matt lived his life exceeded any label or apparent disability. He loved learning and focused on educational courses centered around achieving his goal of utilizing communication to educate others about living with disabilities. He did not let his physical limitations limit his experiences; he loved participating in outdoor adventures such as downhill skiing, water skiing, fishing, camping, zip lining and horseback riding. His passion was wanting others to know that they too could succeed regardless of limitations created by disability. Matt was born on July 15, 1976, in Algona, Iowa. He moved to Omaha with his family when he was 4 years old. In 1991, Matt and his mom moved to Fort Collins, CO. where Matt was able to participate in many inclusionary activities, highlighted by being a contestant in the Mr. Rocky Beauty Pageant fundraiser. He graduated from Rocky Mountain High School in 1997. Later, Matt returned to Omaha where he was able to reconnect with his future wife, Cindy. Matt and Cindy were united during a commitment ceremony at Cindy’s home on the Platte River on July 26, 2014. In 2015, Marilyn and Alan Palafox welcomed Matt into their home, where they not only provided him with support but embraced him as a part of their family. Matt recognized and appreciated the support and training he received throughout his life. As a way to help those in the future, he asked that his body be donated to science to support research about his disorder in hopes that one day a cure would be found. Memorial services will be held at 2 p.m., Tuesday, December 7, 2021 with visitation starting at 1 p.m. at Braman Mortuary Southwest Chapel. Burial and Celebration of Life will be held at a later date. **Masks are required** In lieu of flowers, donations may be made in Matt’s name to Smith-Lemli-Opitz Foundation. https://www.smithlemliopitz.org/donations/

Matthew J. Thies July 15, 1976 - December 1,2021 Matt passed away peacefully at his home in Papillion, NE at the age of 45 on Wednesday, December 1, 2021. He leaves behind his wife, Cindy Carter; parents, Robert Thies and Diane Thies; sister... View Obituary & Service Information

The family of Matthew J. Thies created this Life Tributes page to make it easy to share your memories.