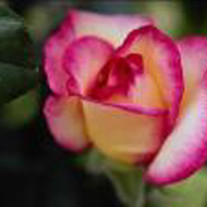 Ella Pankratz was born to Frank and Sarah (Schmidt) Pankratz at Lehigh, KS on August 23, 1914. She was baptized at the age of 15, upon confession of her faith in Jesus Christ. After graduation from high school she worked as a telephone operator in Burrton, KS before moving to Omaha, NE to attend Grace Bible Institute. Following graduation there in 1948 she attended and graduated from the practical nursing program at St. Joseph’s Hospital in Omaha. She was active in nursing in the Omaha area until her retirement in the early 1980’s. In December of 1950 she married Rev. Albert M. Schmidt, then the Director of the Logan Fontenelle Chapel in North Omaha. After what she called Five happy and rewarding years, Ella was widowed when Albert died suddenly in February of 1956. Twenty one years later, in July of 1977 she was married to Marion David Myer of Omaha. Ella and Marion spent a very happy eleven years together in their Florence home until he too was called Home in February of 1988. About a year after Marion’s death Ella relocated to the Skyline Villa where she remained until her death in August of 2007. Ella had very fond memories of her years in Florence, especially her association with the Florence Alliance Church, where she worshipped regularly until age and declining health ultimately made it impossible. Many of the firm friends she acquired while part of that group kept the relationships warm even after the church had ceased operations in recent years. Ella was a firm believer in the power of prayer, and spent many hours praying for family, friends, and the lost. She also loved to read the Bible. Two of her favorite verses were Ps. 91:15; He shall call upon me and I will answer him. I will be with him in trouble, I will deliver and honor him, and Prov. 3: 5-6; Trust in the Lord with all your heart and lean not on your own understanding. In all your ways acknowledge him, and he shall direct your paths. She is survived by brother Ernest Pankratz of Denver, CO; stepchildren Ellen Tschetter of Carpenter, SD; Dennis Schmidt of Crestwood, MO; Robert Schmidt of Omaha, NE; Dorothy Powers of Huron, SD; and Marjorie Halstead of Watertown, NY. Although she never had any children of her own, she became Grandma Ella to twelve grandchildren and more than 20 great grandchildren. She will be remembered for her warmth of personality, her generosity and her love for her Lord. Visitation - Friday morning, 8:30 to 9:30 AM at Braman Mortuary, Interment at Forest Lawn Memorial Park 10:00 AM. Located at 7909 Mormon Bridge Rd. (7900 N 56 St.) Memorial Service - 11:00 AM at Skyline (Villa) Chapel, 7350 Graceland Drive (near 72nd and Military). Memorials to RBC Ministries.

Ella Pankratz was born to Frank and Sarah (Schmidt) Pankratz at Lehigh, KS on August 23, 1914. She was baptized at the age of 15, upon confession of her faith in Jesus Christ. After graduation from high school she worked as a telephone operator... View Obituary & Service Information

The family of Ella Meyer created this Life Tributes page to make it easy to share your memories.

Ella Pankratz was born to Frank and Sarah (Schmidt) Pankratz...

Send flowers to the Meyer family.