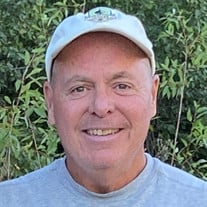 McNamara, Will - age 68 September 27, 1952 - July 11, 2021 Will was born to Bill and Barbara McNamara, the second of six children. He died peacefully, surrounded by his children and partner. He is preceded in death by his parents, and sister, Pegee (Pat) Stewart. His culinary path started as a table busser at Kenny’s Restaurant and Cocktail Lounge in Omaha, and his career began after graduating with honors from the Culinary Institute of America. Professional highlights included a feature on NPR, and his time at Place Pigalle and the Washington Athletic Club. Along his journey, he found a creative outlet in teaching by imparting his skills and knowledge, always with a dash of sardonic wit and amusement. In retirement, Will did consulting, and taught culinary arts at South Seattle Community College and MCC Institute for the Culinary Arts. Will loved life, family, friends and experiences. He was an avid golfer, fisherman, bicycler, and was a spirited fan of all sports, especially soccer and the Seattle Sounders. A voracious reader, he loved thrift stores where he might find a treasure, particularly historical non-fiction. His interest in the arts extended to jazz, rock, and classical music; live stage performances; museum visits; classic movies; and his personal art collection - including a number created by his friend, Gregory Blackstock. He read the NYT religiously and his favorite op-ed writer was David Brooks. His love of travel took him to Japan, Thailand, Hong Kong, Mexico, Rio de Janeiro, Russia, Ukraine, France, and throughout the United States. He relished encountering a good meal and a fine wine. His hometown was Omaha; his favorite city was Seattle; and his soul was in Montana. He loved his children and grandchildren deeply and his pride was evident each time he spoke of them. Will is survived by son, Leland McNamara; daughter, Kacy (Trevor) Howard; son, Michael Leshchyshyn; partner, Linda J. Marshall; grandson, Liam McNamara; granddaughters, Elodie and Paige Howard; sister, Kathleen (Wojo) Walczak; brother, Patrick (Suzanne) McNamara; brother, Michael (Christine) McNamara; sister, Barb (Ed) Thompson; nieces and nephews. In lieu of flowers, please consider a donation to your local food bank as Will did in life. He will be dearly missed by all who loved him. A private celebration of life will be held in Montana at a future date.

McNamara, Will - age 68 September 27, 1952 - July 11, 2021 Will was born to Bill and Barbara McNamara, the second of six children. He died peacefully, surrounded by his children and partner. He is preceded in death by his parents, and sister,... View Obituary & Service Information

The family of Willard J. “Will” McNamara III created this Life Tributes page to make it easy to share your memories.