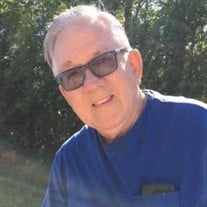 Tommy Gene DeMaranville, age 82, passed away peacefully on Tuesday August 3, 2021 at Bergan Mercy Hospital in Omaha, NE. He was comforted by his family. He was a devoted father, husband and friend to many and lived a full and happy life. Tommy was born on January 11th,1939 in Kansas City, MO. His parents were R. Eugene DeMaranville and Shirley Hill DeMaranville. He attended high school in Des Moines, IA and served in the US Army as a medic from 1956 to 1959. After honorable discharge he attended trade school where he became a sprinkler systems fitter. After graduating trade school he followed his father’s footsteps, and for 60 years Tommy was a proud member of the Road Sprinkler Fitters Local Union 669. He was extremely proud of his career. Everywhere he traveled Tom could be seen looking at the ceiling inspecting the sprinklers making sure they were installed correctly. He would educate whoever was with him. In 1959 he married his high school sweetheart Carolyn K. Kopp and they had three daughters Debbie Diane DeMaranville (deceased), Jackie, and Tammy. In 1975, he was married a second time to Janice James DeMaranville and they settled in Omaha, NE where they raised a foster daughter, Brenda Addleman (deceased), and they lived together for 46 years. Tommy was one of the founding members of the Millard Club, a chapter of Alcoholics Anonymous. He spent 46 years in the halls of AA helping countless individuals find their sobriety while maintaining his own. He had a passion for motorcycles, gardening and playing poker. He knew how to make friends and family laugh; always cracking jokes and singing songs. He is survived by his wife Janice James-DeMaranville of Guthrie Center, IA, by his siblings Nancy Perry of Pensacola, FL and Glen DeMaranville (Joyce) of Edmond, OK, Patricia DeMaranville Roberts (deceased); and daughters Jacqueline Allmendinger (Glen) of Boulder, CO and Tammy Roberts (Rick) of Agency, MO. Grandchildren; John DeMaranville of Des Moines, IA, Rachel Sutnick of Brooklyn, NY, James Bell of San Diego, CA, Sydnee Weigart of Independence, MO, Joseph Walker, Jennifer DeMaranville, Alison Bell, Taylor DeMaranville, Kalcie Weigart, and Jacob DeMaranville of St. Joseph, Mo, 15 great-grandchildren, 1 great-great-grandchild.

Tommy Gene DeMaranville, age 82, passed away peacefully on Tuesday August 3, 2021 at Bergan Mercy Hospital in Omaha, NE. He was comforted by his family. He was a devoted father, husband and friend to many and lived a full and happy life. Tommy... View Obituary & Service Information

The family of Tommy G. DeMaranville created this Life Tributes page to make it easy to share your memories.

Send flowers to the DeMaranville family.