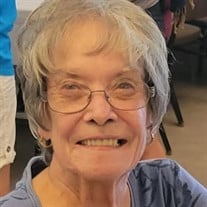 MATYA, Sharon M. 7/29/1941 – 1/5/2022 Sharon Marie was the eldest of six children born to Harold Lee and Mary Rose Price. She was fondly referred to as their little poodie woo. The family moved around a bit from Omaha to Alda to Grand Island and back to Omaha with Sharon going to a number of schools. She had started school like most kids at the age of 5, but never spent a day in kindergarten. She was enrolled directly into the 1st grade. In her own words, she was "doomed to always be a whole year younger than all of her classmates". The family settled in Omaha when Sharon was entering 5th grade and that was the beginning of her life at St. Cecilia's. Sharon would then go on to graduate from Cathedral High School at the age of 16. Sharon earned a Regent's Scholarship to the University of Nebraska, but times were tough and instead of going to college went to work for an insurance company directly out of high school. A year later, Sharon met the love of her life, Donald Matya. They married just under a year later and by the time they celebrated 8 years of marriage they had had 6 children. Their first-born child, Michael died when he was just 7 weeks old. Sharon was devastated. Shortly after this tragedy, Sharon and Don moved to Aurora where family lived and farmed. She loved Aurora, but felt Don was working too hard on the farm and insisted they move back to Omaha. Sharon and Don enjoyed a family life that included camping, fishing, sports leagues, coaching, cookouts, playing board games and vacations. They loved their children, but everyone knew they were first a couple. Time together was spent with a night out dancing or in bowling leagues. If was a safe bet they'd be out on the town if it were Saturday and the teenage children learned this quickly. If it was an especially fun evening, Sharon and Don just loved to sit and chat with the friends no matter the hour. Sadly, Sharon was widowed at the tender age of 51 and never remarried or even dated. When asked why, she said, "she thought about dating, but just really wasn't interested. She had already dated and married the love of her life". Sharon had many talents and skills that included sewing, knitting, crocheting, needlework and ceramics. She would sew her daughters dresses and then later matching pajamas for the grandkids. You'd be hard-pressed to find a family home that doesn't contain an item made with Sharon's hands. Christening blankets, throws, doilies, ornaments, slippers, hats, scarves, Christmas ceramics and numerous other things. Knitted hats and scarves were donated to the less fortunate. Reading and crossword puzzles were favorite past times and if you ever played a game of Scrabble with Sharon you might as well accept that she would likely win, but she always made you feel like you had a chance. Sharon loved playing cards with friends and board games with the kids. She was a quick-counting cribbage player. Sharon loved her very large extended family and loved entertaining. Most family gatherings were held in her home. Everyone was welcome and at home at Sharon's. No one that sought her help went without food, shelter, or clothing. The family is sure going to miss Sharon and that house on the corner. There were a few things Sharon was particularly proud of.. the number of grandchildren and great grandchildren (and more to come) that she had, that she could be a ‘true’ member of the VFW (her Grandson having served in the Marine Corps and was part of Operation Enduring Freedom), her granddaughter’s college degree and her Irish heritage. Even though she and her siblings found out in recent years that maybe that weren’t as “Irish” as they believed. She was also very proud to assume the role of the Matriarch of the family after her mother’s passing. Sharon was preceded in death by her husband Donald and infant son Michael; She is survived by her Children: Michelle (Larry) Guinn, Tina (Scott) Gleason, Larry Matya, Carol (Jeffrey) Mathiesen, Cheryl Matya; Brothers: James, Robert (Lorinda) Price; Sisters: Mary Lou (Jerry) Heaton, Gerianne Dunn, Peggy Price; 16 grandchildren, 15 great-grandchildren; Many nieces, nephews, relatives and friends. VISITATION: Sunday, January 9, 2022 from 1-3:00pm, with a 2:30pm Wake Service, all at Braman Mortuary (72 St. Chapel) FUNERAL MASS: Monday, January 10, 2022 at 11:15am at St. Cecilia Cathedral (701 N. 40 St.) Graveside Service: Wednesday, January 12, 2022 at 11:00am Calvary Catholic Cemetery In lieu of flowers, memorials given to the family will be used in Sharon’s memory at a later date. Braman Mortuary (72 St. Chapel) 1702 N. 72 St. Omaha, NE 68114 402-391-2171

MATYA, Sharon M. 7/29/1941 &#8211; 1/5/2022 Sharon Marie was the eldest of six children born to Harold Lee and Mary Rose Price. She was fondly referred to as their little poodie woo. The family moved around a bit from Omaha to Alda to Grand... View Obituary & Service Information

The family of Sharon M. Matya created this Life Tributes page to make it easy to share your memories.

Sharon Marie was the eldest...