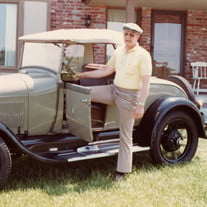 Richard Jebens (Dick) was born in NJ in 1935 to Ray and Lucille Jebens. The family moved a lot while Dick grew up. While Dick was In high school the family moved to Lake City Iowa where Lucille was from. He met Delores Kirby while in Lake City. Shortly after Dick graduated from Iowa State in Engineering Dick and Delores wed. Dick went to work for SquareD after college. They lived briefly in Wisconsin then Moved to Philadelphia, PA. They had two sons, Daniel in 1958 and Douglas in 1961. The family took advantage of all the east coast has to offer visiting many historical sites and hiking in the forests. In 1967 Dick received a promotion and the family moved to Denver. In 1978 Dick took a position with Square D in Omaha to be closer to Dick and Dee’s parents. Dick retired from Square D, took a couple years off and then had a second career at Electrical Fixture in Omaha and Lincoln. Delores passed away in 2006 and Dick wed Pamela Thomsen a couple years later. Dick enjoyed his time with Pam, her mom Eloise, and Pam’s family. Dick had several hobbies. While on the east coast Dick went sailing with some friends and in 1969 bought a Butterfly sailboat. The family survived a thunderstorm during the inaugural sail. Despite the scary storm Dan became an avid sailor and Doug a Windsurfer. In fact the hobby spread to brother in laws, and cousins. Dick also enjoyed woodworking and Ford model A cars. Dick bought a 1928 Model A roadster literally in baskets around 1970. He worked on the car in his spare time and finished the restoration around 1982. Arguing he had two boys, he purchased a rare Model A400 in 1983 for his second restoration. Dick was active in Meadowlark Model A club and attended parades, car shows, regional meets, and enjoyed taking grandkids for rides. In 2012 he gave the cars to the boys. Clearly Dick was handy and helped family, friends and neighbors often. He loved having his grandkids visit during the summer. Dick worked hard and yet laughed off many of life's mishaps. He was very level headed and loving. He will be greatly missed by Pam, Pam’s family, Dick’s family, and friends. Preceded in death by beloved first wife of 49 years, Delores. Survived by wife, Pamela Thomsen; sons: Daniel Jebens, Douglas (Michelle) Jebens; brother Donald Jebens; sister Carol Benoit; four grandchildren and two great grandchildren. He was also loved, and will be missed, by Pam's children and grandchildren. A Celebration of his life will be held in the spring of 2022. Braman Mortuary (Southwest Chapel) 6505 S. 144 St. Omaha, NE 68137 402-895-3400

Richard Jebens (Dick) was born in NJ in 1935 to Ray and Lucille Jebens. The family moved a lot while Dick grew up. While Dick was In high school the family moved to Lake City Iowa where Lucille was from. He met Delores Kirby while in Lake... View Obituary & Service Information

The family of Richard "Dick" Jebens created this Life Tributes page to make it easy to share your memories.