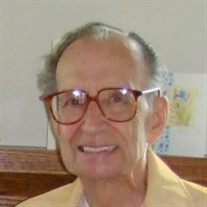 KROUPA, RALPH E. August 18, 1932 – June 27, 2021 Ralph was preceded in death by parents James and Jessie; wife Lois, son Raymond (Robin), and brother Raymond Kroupa (Rosemary); He is survived by his son John (Karen) and grandson Sean; nieces, nephews, family and friends. Ralph, the younger of two sons, was born in Omaha, NE, August 18th, 1932, to parents James (Czechoslovakian) and Jessie (Scottish). He grew up with his brother Raymond in a modest 2-bedroom home near 5th and Bancroft Street that still stands today. After graduating from South Highschool in 1950, Ralph went to work as a lens grinder at American Optical Co. in Omaha, NE. Then from 1952-1956, Ralph served honorably in the United States Coast Guard on the West Coast. Upon his return home, he married Lois McKinney and together they started a family. During their first 6 months of marriage, Ralph worked as a salesman for Wilson Meats in Des Moines, IA. Homesick, they returned to Omaha where Ralph worked the next 13 years as a milkman at Roberts Dairy. He delivered dairy products in the hills of Council Bluffs when milk was still packaged in glass quart bottles. From there Ralph, with the help of his friend and neighbor Don Gray, switched liquids and got a job as a driver/salesman at Capitol Liquors, the local Anheuser-Busch (Budweiser) distributor. Ralph spent the remainder of his work life at Capitol Liquors where he retired with a Teamster pension that helped see him through his remaining years. Throughout his 88 years on this earth, Ralph was liked by almost everyone he met and was easily approachable at Church, in the neighborhood, at work, or the Hy-Vee cafeteria. His attire was impeccable, always dressed in pressed cloths and polished shoes. He was very neat and orderly and always made sure everything was in its place. He had a quick wit and great sense of humor with a satirical flare that insulted few. He was quiet, even-tempered, and polite to everyone he met. To those Ralph disagreed with, he would say, “Kill them with kindness”. Speaking of Ralph-isms, family and friends shared some of the following: start the job, finish the job; when you are done with a tool, put it back where you found it; swearing shows your ignorance; and one of George’s favorites, here comes the Big Shot with the dotted “i". Ralph’s interests and hobbies were many and varied. He liked to gamble on the horses, the dogs and poker... not for the thrill of the bet but the challenge of winning. Ralph never beat the House nor loose it. He enjoyed bowling, billiards, and playing catch with his sons. He was a big Nebraska Cornhuskers fan and took his family to the College World Series at Rosenblatt Stadium every year. Ralph and his wife loved teaming up to play Bridge and Canasta. Family outings were usually simple. A trip to the ice cream shop in Irvington, NE or a night at the Skyview drive in theater made for special family memories. Most important in Ralph’s life was his Catholic faith. He embraced the Church’s teachings and drew great strength and comfort from them. When it came to Ralph’s faith, he did more than talk the talk, he walked the walk. He lived his faith and shared it with his family and friends in his works and deeds. What more could one ask from His faithful servant? In closing, let it be said that Ralph Kroupa was a good man with a good soul who led a good life. Rest in peace Ralph. Graveside Service with Military Honors: Tues., July 13, 2021 at 10:00am at Calvary Cemetery (78TH & W CENTER RD) Memorial Service (Masks required): Tues., July 13, 2021 at 1:00pm at New Cassel Retirement Community (900 N 90TH ST) Reception following service: New Cassel Auditorium Memorials suggested to the "New Cassel Foundation" Braman Mortuary 1702 N. 72ND ST. Omaha, NE 68114 402-391-2171

The family of Ralph E. Kroupa created this Life Tributes page to make it easy to share your memories.