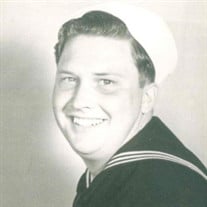 Norbert L. “Babe” Widhalm completed his life’s service and was welcomed by his loving Savior as a “good and faithful servant” on Saturday, May 29, 2021 at age 95. Babe was born to Frank and Elizabeth Widhalm on March 26, 1926 in Osmond, Nebraska. There were many challenges faced as a child, including the death of his father just eight days after Babe was born. The first ten years were spent on a 160 acre farm where he worked with his uncle. He spoke of the transition from two horses and a plow, to tractors. In 1936, he, his mother, and three older siblings moved to Hartington. There he graduated from high school, where he played basketball, and had his first job as a “printer’s devil” for the local newspaper. Upon graduation, Babe entered the Navy. He served on destroyer escorts USS Aurelia and USS Kershaw in the Pacific arena, and was Honorably Discharged on June 2, 1946, having achieved the rank of “Carpenter’s Mate Third Class.” He began a long and successful career with the Bell Telephone Company, starting as a lineman, and ultimately working in the Norfolk office before retiring in 1981. While working as a lineman in Ainsworth, Nebraska, Babe met Doris Alberts. They married on January 12, 1952 and raised four children. Babe and Doris provided a home that was devoted to Christ and Christian values, excellent educational opportunities, music, sports, and support for each child’s gifts and dreams. Their example of 69 years of marriage and family has shaped their children and grandchildren. In addition to being a dedicated and loving father, Babe also loved being a handyman for family and friends, square dancing and going for walks with Doris, singing, playing ping pong in the basement, and riding his bike to work almost every day. He had the respect of co-workers for his knowledge and attention to detail, and served as president of the Norfolk Telephone Workers Union for several years. Throughout his life, he held an unwavering faith in God, and was always seeking truth and a closer relationship with his Lord and Saviour, Jesus Christ. This culminated with active participation in a Messianic community in Omaha, where he and Doris moved in 1994. Babe is preceded in death by his parents and three siblings. He is survived by his wife, Doris, and children: Michael Widhalm and his wife Karen, of Kearney; Dr. Patrick Widhalm and his wife Betsy, of New Orleans, Louisiana; John Widhalm and his wife Melinda, of Omaha; and Lee Porter and her husband, Dr. Tom Porter, of Omaha. The heritage of Babe and Doris includes thirteen grandchildren; nine (soon to be eleven) great grandchildren; and three great-great grandchildren. “For now we see through a glass, darkly; but then face to face; now I know in part; but then I shall know even as also I am known” 1 Corinthians 13.12 Gathering of Family and Friends: Wednesday, June 9, 2021 from 5-7:30pm at Braman Mortuary (Southwest Chapel) Graveside Service: Thursday, June 10, 2021 at 2:00pm at the Omaha National Cemetery (14250 Schram Road, Omaha, NE 68138) In lieu of flowers, the family requests donations to St. Jude’s Hospital in honor of Babe and Doris' great-granddaughter, Lizzie Cooper. Braman Mortuary - Southwest Chapel 6505 S. 144 St. Omaha, NE 68137 402-895-3400

The family of Norbert "Babe" Widhalm created this Life Tributes page to make it easy to share your memories.

Norbert L. “Babe” Widhalm completed his life’s service and was...

Send flowers to the Widhalm family.