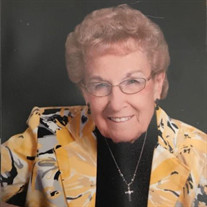 SCHMIEDING, Marilyn “Jean” 1/20/1924 – 5/5/2021 Preceded in death by parents Lloyd and Bessie Whitney, husband Donald, brothers Lloyd Jr.(Dorothy), Don, & Neil Whitney, sister Joyce Dimmitt. Survived by daughters, Deanna (Curt) Nelson, Pam (Paul) Friskopp; grandchildren, Troy (Steffanie) Nelson, Matt (Lori) Edwards, Marla Nelson, Dan (Amber) Edwards, Amy (Cole) Hothan. Step grandchildren, Michelle Eyler, Chandra (Brian) Timmons & Aron (Amanda) Friskopp; 15 Great Grandchildren; sister, Mary Ann Niemeyer;Sister-in-law Judy Whitney; Brother-in-law Kendall Dimmitt; many other relatives and friends. Jean was born in Unadilla, Nebraska. Since there was no Kindergarten, she started school in first grade and graduated from Havelock High School (later named Northeast) in Lincoln, Nebraska at the age of 17. She helped care for her four younger siblings and helped her older brother with his paper route, She carried a knife to cut twine in a shoulder bag along with the papers. One day she ran from a dog that was chasing her and cut her leg. When she misbehaved, her mother would chase her outside around the house to spank her. However she ran faster and had to slow down when she began catching up with her mother. Since she was raised during the depression she sewed her own dresses. When we were children, she made matching dresses for Pam and me and later an Easter suit for my son. She always loved RVing and ballroom dancing. She and Don met at the Pla Mor Ballroom in Lincoln. Early in her career, she worked at the Lincoln Air Base. While following a base ambulance, her car brakes failed causing her to rear end the ambulance. She had a beautiful voice and sang in the base chorus and later Omaha Symphonic Chorus. At First Lutheran Church, she sang in the choir and soloed for services and weddings. I also learned the music while listening to her practice and would silently lip sync the lyrics while I sat with the congregation. She was the leader of my Girl Scout troop, took us camping and taught us many songs. She loved to water ski, One day we witnessed a streaker skiing on the Missouri River. She and Don took many cruises and met people on the ship who would become life long friends. She belonged to a pinochle club beginning in the 50's. Later she loved to play Mexican Train dominoes with her friends at the German American Rathskeller on Friday nights. The majority of her career was spent working at Nebraska Federal Savings and Loan, later known as US Bank, where she retired. She passed away peacefully the day before the anniversary of the May 6, 1975 tornado. After the tornado, she had to fight her way through the National Guard to get to our totaled house. My Father had given me a necklace to hide that he purchased for her for Mother's Day. After searching through the rubble in our backyard, we miraculously found it inside the rain soaked brown paper bag. I thank God for her everyday and her family will always remember her as a loving, supportive Mother, Grandmother, sister and aunt. by Deanna Nelson In lieu of flowers, memorials to Pacific Hills Lutheran Church or Alzheimer's Association Memorial service at Pacific Hills Lutheran Church (90th & Pacific) on May 19, 2021 at 11 A.M. Interment: Evergreen Memorial Park

The family of Marilyn "Jean" Schmieding created this Life Tributes page to make it easy to share your memories.

Send flowers to the Schmieding family.