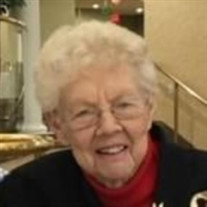 Leora Henrietta (Rippe) Emshoff was born on July 8, 1929 on a farm south and west of Avoca, NE, the oldest daughter of John and Elsie Rippe. She attended Hillman country school through the fifth grade and then transferred to the school in Avoca, riding along with her older brother Maynard. She graduated from Avoca high school in 1947 with seven other classmates. Throughout high school she enjoyed playing volleyball, and it was during a volleyball game that she caught the eye of her future husband, Wilbert Emshoff. They were married in 1949 and Leora entered the civil service, working in the Avoca post office until moving to Wichita Falls, TX in 1952 where Wilbert did basic training after joining the Air Force. After basic training, they were stationed in Spokane, Washington where their first daughter, Peggy was born. When Wilbert was sent to Osaka, Japan to serve during the Korean War, Leora and Peggy moved back to Avoca and lived in an apartment next door to Wilbert’s parents, John and Matilde Emshoff. While Wilbert was overseas, their first son Randy was born in June of 1954. Friend and president of the bank, Elmer Halstrom notified the Red Cross for Leora to let Wilbert know that he had a son who he wouldn’t get to meet until almost a year later when he returned to the states. During the 18 months that Wilbert was overseas, Leora kept busy caring for two small children and teaching herself to sew, something she loved and would enjoy for many years to come. Using the G.I. bill, Wilbert went to flight school and upon graduation the family moved to Omaha where Wilbert took a job as a mechanic and pilot with Duncan Aviation. Daughter Debbie was born in 1956 and son Keith in 1960. Wilbert soon accepted a job as a private pilot for Peter Kiewit which he held for 25, years, and then as a pilot for Warren Buffet for two more years. Leora loved being a mother and housewife and was well known for her homemade bread and cherry pies. After the kids were older, she worked at the Good Samaritan Nursing Home in Millard where she dearly loved caring for the elderly. Over the years there were many wonderful fishing trips to Canada and countless card games with family and friends. Leora continued to sew throughout her life and made many outfits for herself, family and friends. She taught herself cross stitch and created dozens of beautiful pieces, her favorites of which were Christmas projects. Trips to Branson to hear country music became a favorite activity with church friends. A beautiful Alaskan cruise with Wilbert’s cousin Merlyn and wife Velda, and a 50th wedding anniversary cruise with all of her children and grandchildren held special memories for her. Leora was baptized, confirmed and married in the First Lutheran Church of Avoca. She was a member of St. Paul’s Lutheran Church in Millard for more than 50 years where she taught Sunday School and was a member of the Peace Circle. She is survived by children Peggy (Bill) Cox, Randy Emshoff, Debbie (Mark) Schug, Keith (Terry) Emshoff, five grandchildren, three great-grandchildren, sister Elaine (Merle) Hennings, many beloved nieces and nephews, and special cousins Merlyn and Velda Minderman. She is preceded in death by her beloved husband Wilbert, parents John and Elsie Rippe, and brothers Raymond and Maynard Rippe. Visitation: Wednesday, August 18 from 5-7 pm at Braman Mortuary Southwest Chapel, 6505 So 144th St., Omaha, NE Private Interment at Omaha National Cemetery Memorials to: St. Paul Lutheran Church Millard

Leora Henrietta (Rippe) Emshoff was born on July 8, 1929 on a farm south and west of Avoca, NE, the oldest daughter of John and Elsie Rippe. She attended Hillman country school through the fifth grade and then transferred to the school in... View Obituary & Service Information

The family of Leora H. Emshoff created this Life Tributes page to make it easy to share your memories.

Send flowers to the Emshoff family.