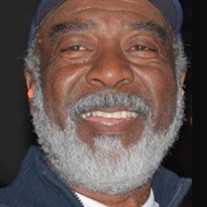 Celebration of Life Jesse James (Popsy) Statham ​ Jesse James Statham (known affectionately to his grand and great-grandchildren as Popsy) was born in Tylertown, MS, to Bertha D. Statham (Williams) and C.J. Statham on January 19, 1946. He was their only son, and he was preceded in death by his parents, his sister, Jonell Harvey and his step-son James (Jimmy) Johnson. At the age of 9 years old, his family moved from Mississippi to Detroit, MI. There he completed his primary education and began a career with the Ford Motor Company. Seeking a better opportunity for himself and his family, Jesse applied for a job with the Federal Aviation Administration. He in turn was offered an even greater opportunity as an Air Traffic Controller. It was through this position at the airport that Jesse met the love of his life, Edna Earlene Frasier. Although, they were united in Holy matrimony on June 1, 1991, they were together 40 loving years, blending together two families. His career and community involvement were very important to him and it showed through his achievements. Throughout his career with the FAA, Jesse worked in various locations throughout the Midwest and the East. He supervised teams of Air Traffic Controllers and managed the Air Traffic Control Tower at Eppley Airfield. Jesse managed the teams that installed the new Air Traffic Control satellite systems for the five busiest air traffic facilities in the country: New York, Washington D.C., Atlanta, GA, and Northern and Southern California TRACONS. He was also chosen to represent the FAA in the NORAD military installation in Colorado. Jesse was dedicated in serving his community and served in various capacities in many organizations. He served as a member of the Institutional Review Board – Human Research Subcommittee for the VA Hospital; he was a Founding member of the Omaha Chapter of 100 Black Men, serving as the President for two years. He also served as the Douglas County Housing Authority Commissioner for three years; & Advisor to the North Omaha Neighborhood Alliances. He was also appointed to serve on the Citizens Complaint Review Board for the City of Omaha by then Mayor Harold Daub, serving from 1996 to 1998. He was also a member of the National Association of Parliamentarians and the local chapter for which he was recognized recently, and past Vice-President of the National Black Coalition of Federal Aviation Employees. After retirement, Jesse was able to devote more time to his favorite pastimes. In addition to his affinity for classic cars, Jesse loved to travel and did so throughout his life. He passed on this love of travel to his daughter, Michelle. He traveled frequently to visit close friends and family. Retirement allowed Jesse to fully immerse himself in his love for golfing and he cherished his annual golfing trip to Myrtle Beach with his golfing buddies. Jesse leaves to cherish his memory: his loving wife, Edna Statham, daughter Michelle Statham (Oklahoma City, OK), step-daughter Tamorra Frasier (Omaha, NE), son Rodney Statham (West Palm Beach, FL), and step-daughter Stephanie Frasier (Omaha, NE). He will live in the hearts of his nine grandchildren, thirteen great-grandchildren, sisters Bertha Faye Lenoar (Detroit, MI) and Barbara McGee (New Orleans, LA) and a host of nieces, nephews, cousins and friends. MEMORIAL SERVICE CELEBRATING THE LIFE OF JESSE JAMES STATHAM ON: Thursday, July 22, 2021 11:00am The Worship Center – North 24th Street Church of God 2021 N 24th Street Omaha, NE 68110

The family of Jesse J. Statham created this Life Tributes page to make it easy to share your memories.