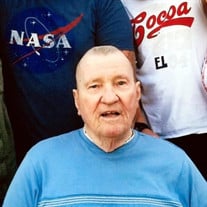 James Edward Allington Born: September 23,1933 Married: September 28,1956 – Janice (Schleu) Allington Parents: Vern and Mable (Thiessen) Allington Preceded in death by his wife, Janice, daughter Kim Lyman, three brothers, and two sisters Survived by daughters Karen Allington of Orange Texas, and Vicki (Steven) Stark of Omaha Grandchildren: Nicole Block, Steven (Amy) Stark, James (Katie) Lyman, Amber Stark Great-grandchildren: Hailey, Hannah, Hunter, Harper, Caleb, Jaeda, Jack, LuLu, Bentley, and Theo Many nieces and nephews Jim was raised by a single mother after losing his father when he was only 6 years old. He started working at a very young age and sometimes held two or three jobs to help take care of his family. He learned quickly that hard work and dedication is what it took to make a good name for yourself. From 1953 – 1955, Jim was a member of the 46th AAA Battalion in the U.S. Army. He proudly served his country in the Korean War. In 1961, Jim began making a living as a glass salesman and worked for various glass companies over a 40-year time span - Menck & McGovern Glass Company, Millard Glass Company, Husker Glass. In 2000, Jim went to work for his good friend, Dana Delezene at Heartland Glass Company, from where he retired. Jim was a self-made blue-collar worker who was very well-known and respected in the construction community. He was a hard worker, a man of his word, a good friend to many, and a perennial jokester. Jim loved the outdoors, Husker Football, his Ford Pickup Truck, John Deer tractors, Polka music and Johnny Cash. During his over the road sales days, he was known on the highways as the “Man in Black.” Jim was active in the Omaha Home Builders Association and oversaw the Omaha Home Show at the Civic Auditorium for many years. He was a 32nd Degree Mason. Jim was larger than life! He was devoted to his wife and family; there were no limits to which he would go to provide for and protect them. He built a home where his family and friends gathered--coming together to create a lifetime of memories. Jim was a fierce protector, the Dad who had all the answers, the Grandpa with endless love - the rock of his family. Jim will truly be missed, but his legacy will not be forgotten. It continues through the lives of his daughters, grandchildren, and great grandchildren. Visitation: Thursday, October 7 from 5-7 pm at Braman 72nd. Celebration of Jim's Life: Friday October 8 at 11 am, also at Braman 72nd. Interment: Evergreen Cemetery with full military honors

The family of James "Jim" Edward Allington created this Life Tributes page to make it easy to share your memories.

Send flowers to the Allington family.