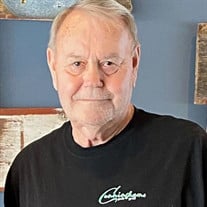 Guy LeRoy Richards, 73, died Friday, May 28, 2021 at Lakeside Hospital in Omaha. Guy was born on July 17, 1947 in O’Neill, NE to Ivan Richards and Lila (Streeter). He lived in many places as a child and ended up in Overton, Ne with his Grandpa and Grandma Streeter. He graduated from Overton High School in 1965. On February 4th, 1967 Guy married Imogene Cunningham of Eddyville. To this union three children were born – Brad, Ken and Derek. He worked at Rockwell Mfg Compay, Nebraska Public Power and Eaton Corp in Kearney, NE. He made the leap to strike out on his own and along with his two partners, started two successful drywall businesses, Quality Finishers and Richards and Klein Drywall where he worked for over 30 years. He retired in 2007 and he and his son Derek worked together doing drywall and a lawn business for the next three years in Omaha. He found a real retirement career in the restaurant, Cunningham’s Pub and Grill he and Imogene purchased in 2010. He loved the people he worked with and the customers who he met over the years. The family spent many summers over many years at the Harlan Country Reservoir where they own a cabin and Guy spent many days each summer just relaxing and looking forward to holidays that he spent with the kids and grandkids. Guy is preceded in death by his parents. Survivors include his wife, Imogene; sons, Brad, Ken and Derek (Leah); grandchildren, Justin (Justine), Amber (Shay), Carson, Madi, Dylan, Jack, Tyson, Julian and Ellis; great grandchildren, Adalynn, Rhett, Maddix, Chantz and Lane; brothers, Robert & Les; sister Jeanne; numerous aunts, uncles and cousins. Celebration of Guy's Life: Saturday, June 19th at 11:00 a.m., with family receiving friends one hour prior to the service, all at Braman Mortuary (Southwest Chapel). Pastor Jim Haack will officiate. Burial arrangements will be privately held with family. Casual attire is requested. In lieu of flowers, Memorials are suggested to your church or charity in Guy’s name. To live stream the service, visit www.bramanmortuary.com Braman Mortuary - Southwest Chapel 6505 S. 144 St. Omaha, NE 68137 402-895-3400

The family of Guy LeRoy Richards created this Life Tributes page to make it easy to share your memories.