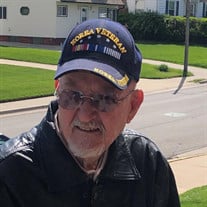 DOESCHOT, GORDON M. 12/27/1932-12/11/2021 Gordon was born December 27, 1932 in Firth, Nebraska to parents John and Ina Doeschot. Later in childhood he moved to Omaha, Nebraska where he graduated from Omaha North High School in 1950. After graduation, he worked in the UP shops as a Carman Apprentice and Section Foreman. He then served in the US Navy during the Korean War and returned to Omaha where he earned a B.S. degree in social work from Omaha University and met his wife Nan. They were married June 27, 1959 in Omaha, Nebraska where Gordon served 12 years as Chief Probation Officer for Douglas County Juvenile Court and continued to earn a Master’s Degree from Omaha University in 1969. During his years of employment he also worked for the YMCA, United Way, and retired in 1994 from his last job of 22 years as Executive Director of the Social Settlement. While working in the social work field, Gordon attended Graduate Court Administrator’s School, YMCA Director’s School, and served on the board as President of the Executive Director’s Council United Centers of America and was a member of the Juvenile Council Judges Association. Besides work, Gordon was also an active member of St. Paul’s Lutheran Church where he taught Sunday School, served as a sponsor of youth groups, and as a member of the church council. As an active member of the Millard Jaycees he served as secretary of Millard Days, enjoyed playing on the men’s slow pitch softball team and became the first “Exhausted Rooster” of the chapter. Other activities he enjoyed and was involved in were serving on the American Legion #374 Honor Guard for 10 years, coaching baseball and football for the Millard Athletic Association, and refereeing volleyball and umpiring girls softball. Gordon was also an avid golfer, hunter, and fisherman and enjoyed the sun, the outdoors and fellowship with his friends. Some of his greatest joys were training and field trialing his dogs as well as watching his sons and grandchildren participate in sports and being involved in other family activities. Honesty and fairness were his virtues which gained him respect from those who knew him. Gordon was preceded in death by parents John and Ina Doeschot and brother Gene. He is survived by his wife of 63 years Nan; sons Greg (Melanie), Jeff; and grandchildren Matt, Lauren, Jessie, and Courtney. GATHERING OF FAMILY & FRIENDS: Thursday, Dec. 23, 2021, from 1-3:00 PM at Braman Mortuary (Southwest Chapel). INURNMENT: Westlawn Hillcrest Cemetery In lieu of flowers, memorials to the Disable American Veterans Braman Mortuary – Southwest Chapel 6505 S. 144 St. Omaha, NE 68114 402-895-3400

DOESCHOT, GORDON M. 12/27/1932-12/11/2021 Gordon was born December 27, 1932 in Firth, Nebraska to parents John and Ina Doeschot. Later in childhood he moved to Omaha, Nebraska where he graduated from Omaha North High School in 1950. After graduation,... View Obituary & Service Information

The family of Gordon M. Doeschot created this Life Tributes page to make it easy to share your memories.