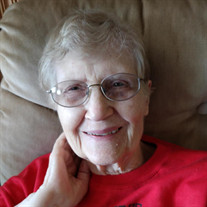 Geraldine Clara Scheer Julin, beloved Mother and Grandmother, age 95, went to be with her Savior Jesus on October 4, 2021. She was born on August 17, 1926 in Winnetoon NE in Knox County. Her parents were Carl, 35 years old, and Alma, 36 years old. She had one brother, Carl, and two sisters, Elma and Martha. Her father was a blacksmith and later sheriff of Knox County in Center, NE. He abandonded his family in 1930 when Jerry was four and she never saw him or heard from him again. Jerry grew up on the family farm in Creighton, NE and attended the country school. They were very poor due to the Great Depression. Jerry and her mother moved to Omaha, and she attended St. Paul Lutheran School where her uncle Eckhart Scheer was superintendent. She graduated in 1943 from Technical High School. A lifelong learner, Jerry took business courses and worked for an attorney in Senator Roman Ruska's law office. Missing the bus to work one day, she hitched a ride to catch up to the bus. The person who stopped in his truck was her future father-in-law, John Julin, Sr. A blind date was arranged with his son John Julin Jr., and their love began. They were married October 27, 1946 and were married for 66 years. They had four children together: Kathy, Mary, John Scott, and Jay. Johnny passed away in 2012 at the age of 90. Jerry's motto for a long marriage was, "Peace at all cost". A significant part of their family life revolved around cabin #86 at North Lake in South Bend NE. Purchased in 1975, it was later sold and they built cabin #22 on Middle Island adjacent to North Lake. It was sold and they bought cabin #88 back on North Lake. Jerry loved her cabin time, sacrificing many of life's pleasures to keep it for her family. Many treasured events became part of the narrative of the cabin: holidays, birthdays, clean-up days, hideaway weekends, escape afternoons, women's retreats, of which card games into the wee hours of the morning became a staple. Jerry sold her cabin to granddaughter, Chelsea, and her husband, Kenny, in 2021. Jerry devoted herself to her family, offering "ten years of free grandkid babysitting, renewable." She loved having sleepovers with the grandkids, telling improvised "Oscar" stories to Monica, Cassi, Chelsea, and John Paul at bedtime. Blessed with a high IQ, Jerry relished any kind of game, especially card and board games. She was a gifted bridge player, earning an International Match Point for winning an area bridge tournament. While being cared for in in-home hospice she looked forward to watching the Game Show Network, enjoying matching wits with the contestants. She was also a great cook, and her family will always remember her potato salad, lemon merengue pies, angel food birthday cakes, special chocolate whipped cream birthday cakes, strawberry pies, carmel corn and taco salads. In 2017, she was able to meet her firstborn son, Brian, for the first time since putting him up for adoption after his birth. He and his wife Ann have come back to visit several times and have kept in touch by phone. Jerry volunteered as a lunch courier for Meals on Wheels for about 20 years, delivering lunches for hundreds. She also worked as a Census taker for the U.S. Census Bureau. Always having a soft spot for the underdog, she loved animals, owning many cherished dogs, cats, mice, turtles, ducks, rabbits, chickens, and a pet pig, "Chops". There has never been anyone like her and there never will be. Her family will miss her every day. Her children are: Kathy Julin, Omaha; Mary (Doug) Johnson, Omaha; Scott Julin, Omaha; Jay Julin(Special Friend, Karen Martin), Omaha; Brian (Ann) Settles, Griffin, GA. Her grandchildren are: Monica (Nick) Smith, Aurora, CO; Cassi (Koan) Nissen, Lincoln; Chelsea (Kenny) Liscum, South Bend; John Paul Julin, Denver, CO; Her great grandchildren are: Kallen (Amber) Nissen, Clatonia, NE; Leona, Clara, and Soren Nissen, Lincoln; Madelyn and Caleb Smith, Aurora, CO; and many nieces, nephews, and friends. GRAVESIDE SERVICE: Friday, November 12, 2021 at 10:00am at Omaha National Cemetery Following the service: Friends and family are invited to a celebration in her honor at Anthonys Steakhouse (7220 F Street Omaha, NE), from 11:30am-1:30pm.

Geraldine Clara Scheer Julin, beloved Mother and Grandmother, age 95, went to be with her Savior Jesus on October 4, 2021. She was born on August 17, 1926 in Winnetoon NE in Knox County. Her parents were Carl, 35 years old, and Alma, 36 years... View Obituary & Service Information

The family of Geraldine C. Julin created this Life Tributes page to make it easy to share your memories.

Send flowers to the Julin family.