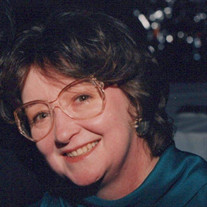 Elaine Ann Blotzer-Wise born 10/15/1942 in Wilkinsburg, PA and passed on 7/7/2021 in Valley, NE. Elaine possessed outstanding technical and management skills that resulted in a successful career. Attending Robert Morris Business School and the University of Nebraska aided in that success. She was just a few hours short of obtaining a Bachelor of Arts degree. Her early years took her from Pennsylvania to the far west working in Washington State, California and Alaska, writing speeches, radio show discussions and group training sessions for campaign volunteers and business executives. She coordinated many functions including the 1972 Klondike Festival and the 1965-66-67- 68 Gold Days Celebration and World Eskimo Olympics in Fairbanks, Alaska. She then moved to Anchorage, AK, serving as the election supervisor for Lt Govern Boucher and then set up her own management consulting firm to provide office management services for businesses including craft unions in Alaska. In 1975 Elaine returned home to Pittsburgh to work for the Greater Pittsburgh Chamber of Commerce as the Governmental Affairs Divisions Secretary. The next step of her career was to accept the position as Executive Secretary and Vice President of the Sargent Electric Co. a national electrical contract firm. In 1984 Elaine moved to Omaha, NE and married Rick Wise her husband of 36 years. With this move she accepted a position as a legal secretary for McGrath North, then later becoming an Associate with the market research firm, Rozmarin & Associates. In 1985 health issues arose making Elaine unable to work full time. Moving from Omaha, NE to Lincoln, NE then Fairview, OK, because of her husband’s job, kept her busy. In 1996 they moved to Columbus, NE, where her sister Jill and she had fun designing her new home on a local lake. She lived there for nearly twenty (20) years. With the retirement of her husband in 2019 she moved to Valley, NE to be closer to doctors and family. As an avid reader, a good book brought her much joy. Her personal library still contains over 1,000 books. Elaine was blessed with a beautiful voice and enjoyed sharing her talent with friends and family. Elaine is preceded in death by her parents, James Francis and Lois Elaine (Tudor) Blotzer; brother-in- laws, Robert Liberty and John M. LeCuyer. She is survived by her husband Rick D. Wise; daughter, Julie R. Wise; sisters, Jill Liberty and Kathy B. LeCuyer; brother James R. Blotzer (Chris); sister-in-law, Anne Taylor (James); many nieces, nephews, cousins and friends. Celebration of Elaine’s Life: Monday, July 12 at 11 AM with visitation one (1) hour prior to the service and a luncheon immediately following the service at Braman Mortuary Southwest Chapel at 6505 S 144th St. Omaha, NE 68137. In lieu of flowers donations to The Michael J. Fox Foundation for Parkinson’s Research are appreciated. Braman Mortuary Southwest Chapel 6505 S 144th St Omaha NE 68137

The family of Elaine B Wise created this Life Tributes page to make it easy to share your memories.

Send flowers to the Wise family.