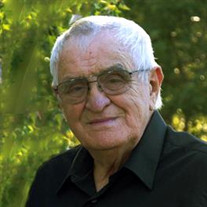 Dale Howard Giebler was born in Fremont, NE on August 3 1934 to James “Harry” and Florence (Grob) Giebler. He was the fourth of five children. His love of golf started early in life, growing up with his siblings Lillian (Bob) McGowan, Loren (Bernice) Giebler, Lois (Fred) Juilfs, and Joann (Ervin) Drews on the family acreage adjoining The Fremont Country Club where his dad was the greenskeeper. He attended Fremont High School where he played on the Golf Team and graduated with the class of ’52. After high school he attended college courses at Midland College. Then he decided to enlist in the army to serve his country in Korea. He was following a long family tradition of service, his dad in WWI, brother Loren in WWII and others dating back to the Revolutionary War. Dale loved his country and was proud to serve. When he returned home after his tour of duty, Dale tried a stint in banking at the Omaha Stockyard National Bank. His love story began during this time. He met Linda Kull through friends at Peterson’s Café in Fremont and started dating the next week. Ten months later they were married on May 2, 1959. They lived in Fremont when they had their first two children, Lauri and Eric. They purchased their first home and moved to Millard when Dale took a job at Western Electric and had baby number three, Tyrone. At Western Electric he became known as “Buffalo”. He joined the family up as members at a new golf course in Ashland to share and continue his love of golf. Ashland Country Club was new and needed a golf pro. When Dale started offering guidance based on his experience in the golf world they offered him the position. Dale accepted and began the career of his life. His first order of business was to become a PGA professional. He signed up for the program and became a member of the PGA. He grew the membership and added a second nine holes during his career of 30 years. One of his greatest highlights in golf was playing at Augusta National while at a PGA convention in Georgia. He made a lot of great friends and formed lifelong relationships within his golf community. He taught his wife and children the game of golf and introduced it to his five grandchildren. He retired from Ashland Country Club in 1996. After retiring he became a part time “professional” driver for Omaha Auto Auction to fill his time along with golfing and going to lunch with friends, traveling and playing golf with Linda across the country and spending time with family. His family continued to grow adding 6 great grandchildren. Dale loved his family and friends and entertained all of us with his many stories. Dale was diagnosed with Alzheimer’s several months before his death. He lived a full and active life until that time. Linda cared lovingly, tirelessly and courageously for him at home until he left this earth. As a believer in Jesus Christ his Savior we know we will reunite with him in heaven and who knows maybe even get a few rounds in with him. Hit ‘em straight Buffalo. He is survived by his wife of 62 years, Linda Giebler; children: Lauri (Greg) Johnson, Eric Giebler, Ty Giebler; grandchildren: Lindsey (Brad) Corr, Gavin (Sarah) Johnson, Sydney (Jordan) Tan, Antonia Giebler, Taryn Giebler; sisters Lois Juilfs, Joann Drews; many other relatives and friends. Visitation: Tuesday, Dec. 28, 2021 from 5-7:00pm at Braman Mortuary (Southwest Chapel) Celebration of Dale’s Life: Wednesday, Dec. 29, 2021 at 11:00am at Divine Shepherd Lutheran Church (150 & Q St.) Graveside Service: Thursday, Dec. 30, 2021 at 10:00am at the Omaha National Cemetery To watch a livestream of the service, use the following link: https://www.youtube.com/watch?app=desktop&v=V3_KwQhgUTU Braman Mortuary - Southwest Chapel 6505 S. 144 St. Omaha, NE 68137 402-895-3400

Dale Howard Giebler was born in Fremont, NE on August 3 1934 to James &#8220;Harry&#8221; and Florence (Grob) Giebler. He was the fourth of five children. His love of golf started early in life, growing up with his siblings Lillian (Bob) McGowan,... View Obituary & Service Information

The family of Dale H. "Buffalo" Giebler created this Life Tributes page to make it easy to share your memories.

Send flowers to the Giebler family.