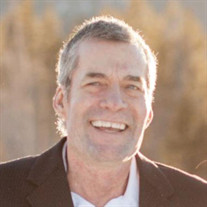 SPETHMAN, Curt J. 8/24/1955 – 1/6/2022 Curt Spethman was born on August 24th, 1955 to Robert and Virginia. He was the only boy out of six children. Curt graduated from Millard Public Schools in 1974. Afterwards he worked for and became part owner of his father’s lawn care business. Curt met Brenda in the summer of 1982. They married on May 18th 1984. During their reception, Curt got a bloody nose and got it all over his white tuxedo and had to go to the ER to get his nose cauterized. Curt and Brenda had their first child, Todd, on August 23rd 1985. During those days, you didn’t find out the sex of the baby. Curt kept telling Brenda that he wanted a son before he turned 30. Brenda was that good! She gave Curt a son one day before he was 30. Then, they had a daughter, Kari, on January 3rd, 1989 and their family was complete. A son and a daughter that brought such joy to their parents. In 1995, the lawn care was closed down and Curt went to work for a glass company. On January 3rd, 1999, our garage caught on fire and Curt made the news the first time that day with the headline reading “Man lights fire then leaves.” He started a fire in the wood burner to warm up the garage as it was the coldest day of the year, a fireman got hurt because he took an axe to the plexiglass and it bounced back at him, he was ok though. All 3 local TV stations were here. Brenda and Kari missed the excitement as they were out celebrating her 10th birthday. On April 12th, 2008, Curt became a grandpa when Marlie was born. His second granddaughter came shortly after on April 15th 2009, when Avery was born. Marlie and Avery were able to create many special memories with both grandparents camping and fishing among other things. In January 2016, Curt started being sick and on February 4th, he was admitted to the hospital. Curt and Brenda were supposed to leave for Mexico on February 6th, but that didn’t happen. On February 15th, Curt had an LVAD, he was released from the hospital at the beginning of March. Curt went back to the hospital 10 days later and was in the hospital for 5 weeks. On April 6th, Curt went on the transplant list and on April 11th, Brenda received a phone call from Curt about one hour after Brenda left the hospital saying “I hate to bother you, you were probably in bed, but the heart team called and they have a heart for me and I go to surgery tomorrow at 10 in the morning.” Brenda then packed a bag and went back to the hospital. Surgery was a success and Curt and Brenda were able to get back to the things they loved to do. On May 21, 2016, Todd and Christina got married and Curt was able to make it to their wedding. On March 7th, 2017, Curt was blessed with another granddaughter, Charlotte, and on August 25th, 2019, he was blessed with one more granddaughter, Josephine, for a total of four granddaughters. Curt and Brenda spent their free time going camping, traveling, fishing, and hanging out with friends and family. On August 6th, 2020, Curt was diagnosed with small cell lung cancer. He responded to treatment well; from Nov 2020 – May 2021, there was no evidence of disease. In May 2021, they found out the cancer metastasized to his brain. He underwent radiation and responded really well to that too. On April 3rd, 2021, Kari and Josh got married in Colorado and Curt gained a grandson, Landen. In July 2021, we discovered that the cancer had returned and Curt did more chemo, but it kicked his butt this time. On January 6th, 2022, Curt passed peacefully at home surrounded by his family and he is now at peace. Curt loved his family and friends. The closeness of the Spethman clan is one of the things that attracted Brenda to Curt. Memories (Kari): • Mom and dad always took us camping and fishing during our childhood. Dad would always have a fire going right in the morning and at night. I remember walking the river at Two Rivers or fishing during the day. One time while fishing out at Louisville, I caught a snapping turtle that my dad had to help reel in and get the hook out. • Going out to the farm and being pulled on sleds behind the Odyssey GoKart. • He always used to belt out “Do wah diddy diddy dum diddy do.” • His Donald Duck voice • His signature dance move • Epic Garage parties – dad would always turn his hat backwards and play the air guitar. He would always have big announcements during parties “Can I have your attention please…Rock on Space Monkey!” • Dad always had a fire going in the garage; that was his mancave and happy place. Memories (Todd): • I would always go with dad to the farm in the old white truck to dump grass and he would flip on the “Turbo” switch (which was just a broken switch on the dashboard) and he would downshift and then step on it. • I rented a toro dingo to build my paver patio and after about 15 minutes of dad “supervising”, he said “let me show you how to use that thing” where he immediately caught the bucket on my deck and ripped a board off. Preceded in death by parents Robert & Virginia Spethman; He is survived by wife Brenda Spethman; son Todd (Christina) Spethman; daughter Kari (Josh) Padget; grandchildren: Marlie, Avery, Charlotte, Josephine, Landen; sisters: Beth Martens, Christine (John) Ramirez, Janice (Johnny) Graves, Diane (Mike) O’Hern, Gaylene (Jay) Hines; Many other relatives and friends. Celebration of Curt’s Life: Tuesday, January 11, 2022 at 11:00am, with visitation one hour prior to the service, all at Braman Mortuary (Southwest Chapel) In lieu of flowers, memorials to Nebraska Medicine Heart & Vascular Fund, 2285 S. 67 St. #200, Omaha, NE 68106 or click on the following link to donate: https://secure.nufoundation.org/give?fundid=01144640&sitename=Nebraska%20Medicine%20All%20Departments&wprefer=https://nufoundation.org/give/nebraska-medicine/&_ga=2.217077782.1477951252.1641673956-369070702.1641673956 Braman Mortuary - Southwest Chapel 6505 S. 144 St. Omaha, NE 68137 402-895-3400

The family of Curt J. Spethman created this Life Tributes page to make it easy to share your memories.