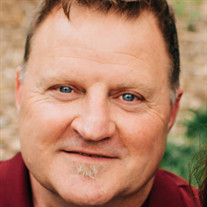 Charlton “CJ” Trader died in his home, on Friday, October 15, 2021, at age 59. CJ was preceded in death by his parents, Frederick and Dorothy (Niday) Trader and two unborn babies. He is survived by his beloved wife of 15 years Sarah, and daughters, Isabella and Cora; sister Shellee (Chuck) Seymour; nephews Nathan and Andrew, niece Kristen, and great nephew Ulysses as well as many loving in-laws, nieces, nephews and a host of long-time friends. CJ was born in Omaha, Nebraska on March 15, 1962, to Frederick E and Dorothy L (Niday) Trader. He is a graduate of Benson High School, where he was involved in sports, band, choir, Studio Singers and theater. After graduating high school, CJ attended College of the Ozarks, in Missouri, where he studied Music and Theater. He was involved in many musicals and Summer Stock Theatre, where he often played the lead role. After returning to Omaha, he attended and graduated from Nancy Bounds School of Modeling. CJ was a natural “Mr. Fix-It” and spent the majority of his professional career working in construction, either for his dad’s company (FETCO Construction), or later as a Facilities Manager and Director. Over the years he volunteered at the YWCA Crisis Hotline, held numerous positions on the Board of Directors for the 12 Step House, local and National Codependents Anonymous organizations and the Omaha Sports Club. CJ was first and foremost a family man and in 2009, he put his career aside to become a stay-at-home dad. He learned quickly that support for at-home dads was limited so he, along with several other local dads, started the Linomaha Dads Organization, later re-named Omaha Dads. He would go on to become a Board Member for the National At-Home Dads Network, in which he was very involved and attended many retreats. In his free time, he loved playing volleyball, Marvel comics, reading, singing, traveling and sharing his humor with the world. Most of all, he enjoyed being with his family. His humor, love and kindness will be missed by all who knew him. Celebration of C.J.'s Life: Saturday, October 23, 2021 at 11:00am at Braman Mortuary (Southwest Chapel) In lieu of flowers, click on the link below to give a memorial to the family: https://everloved.com/life-of/charlton-trader/donate/checkout/?flow=202

Charlton &#8220;CJ&#8221; Trader died in his home, on Friday, October 15, 2021, at age 59. CJ was preceded in death by his parents, Frederick and Dorothy (Niday) Trader and two unborn babies. He is survived by his beloved wife of 15 years Sarah,... View Obituary & Service Information

The family of Charlton "C.J." Trader created this Life Tributes page to make it easy to share your memories.