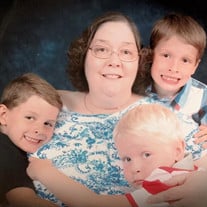 UFFORD, Barbara Lynn 4/27/1956 – 9/15/2021 Barbara Lynn Ufford was born April 27, 1956 in Brush, Colorado to parents Eugene Morris and Velma Jean Doane. She was later adopted by her mother Sarah Joann Boston. Barbara grew up in Colorado and married the love of her life, Robbie Ufford in 1976. Robbie and Barbara moved to Coeur d’Alene, Idaho and had two children, Lisa born in 1978 and Nick in 1980. Barb and her family enjoyed camping, spending time in the mountains and picking blueberries. Barb loved to sing, be it in the choir as a teenager or in the car as a mother. Robert worked as a logger and was tragically killed in a logging accident October 10, 1983 at the young age of 27. Barb and her young children moved back to Colorado to be closer to family. She completed her Associate degree in Radiologic Technology at Ames Community College. In 1990, she and the kids followed her sister JoAnne Clement and moved to Malcolm Nebraska. Barb worked as a Radiologic Technologist at Bryan LGH Hospital and Clinics until her retirement. Lisa attended the University of Nebraska Lincoln and met Brian. They were married in 2002 and have 3 sons: Braden, Jared and Cory who are all in high school at Millard South in Omaha. Nick joined the Navy after graduation in 1998 and upon discharge, moved to the Pacific Northwest. He became a father to Robert from his first relationship. He is now married to Mary and they have 4 children: Brandon, Jonathan, Kayla and Aiden. Barb loved her family and was happiest when she was spending time with her grandkids. She loved to joke and laugh. She passed away on September 15, 2021. Barb is preceded in death by her Husband Robert Ufford, Father Eugene Morris, Mother’s Sarah Joann Boston and Velma Doane, Sisters Debra Jean Morris and Glynda Sebastian and Brother William Morris. She is survived by daughter Lisa (Brian) Yager, son Nicholas (Mary) Ufford, her 8 Grandchildren, Braden, Jared, Cory, Robert, Brandon, Jonathan, Kayla and Aiden. She is also survived by her siblings JoAnne (Gregg) Clement, John (Arlene) Morris and Gayle (Russ) Zima; Sister-in-law Jane Morris; Many nieces and nephews as well as many other loving friends and relatives. We love her and will miss her dearly. Celebration of Barbara’s Life: Wednesday, Sept. 22, 2021 at 11:00am, with visitation one hour prior to the service, all at Braman Mortuary (Southwest Chapel) Memorials to The Farm: The Senior Dog Sanctuary, 469 Co. Rd. 21, Ceresco, NE 68017 or dontate at www.patreon.com/user?u=25434123 Braman Mortuary – Southwest Chapel 6505 S. 144 St. Omaha, NE 68114 402-895-3400

The family of Barbara Lynn Ufford created this Life Tributes page to make it easy to share your memories.

Send flowers to the Ufford family.